In a classic Lutheran High basketball game, the Mustangs used their depth and style of play to outlast it’s opponent and pick up the win against Stacey High School in boys basketball on Tuesday night.  The Mustangs used a big 4th quarter to propel themselves to the 72-64 victory and nab their 7th win of the season. 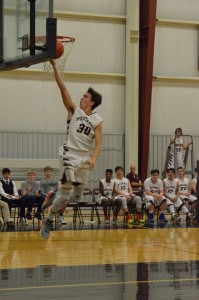 In a contest that was even throughout, it took until the 4th quarter for any team to gain separation.  Stacey led 14-13 after the first quarter and took a 30-28 lead at the half. The Mustangs trailed at the end of the third quarter as well 49-47. In the end, the Mustangs led at the end of the only quarter that matters, as they outscored the Eagles 25-15 to grab the win.

Four Mustangs were in double figures. Junior Collin Hunick led the way with 18 points while adding 3 rebounds and 4 assists. Juniors Phillip Williams recorded a double-double with 12 points and 12 rebounds while Bryce Connolly added 12 points and 7 rebounds. Corey Friesenhahn added 10 points to go along with 3 assists. Zack Gentry and Keith Dukes each added 6 points for the Mustangs.

Lutheran (7-3) fresh off their Consolation Championship at the CASA Tournament this past weekend will host Natalia High School in a battle of the Mustangs on Friday night. Tip off is slated for 7:30 at “The Barn.”