All 3 basketball teams battled to the finish on Tuesday, and all 3 teams came out victorious. The JV boys competed hard at The Christian School at Castle Hills and won with a final score of 39-36.  The Varsity boys took the lead early against Castle Hills and held onto an 8 point lead going into the 4th quarter. Castle Hills hit a bucket at the buzzer, but the Mustangs won with a final score of 69-67.  Senior David Wenthe led the scoring with 23 points. Dristin Riebel and Mason Knowles added 15 and 13 points, respectively. 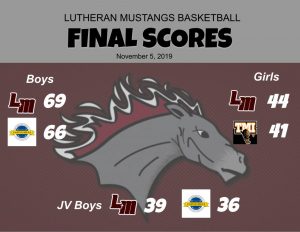 The Varsity girls team opened their season with home court advantage.  The Mustangs came out strong and were up by 6 at halftime. TMI rallied back in the 4th quarter, but the Mustangs held on for the win, 44-41.  Sophomore Maya Sanders led the team in scoring with 19 points, and also had 12 rebounds for a double-double. Sophomore Kate Simnitt added 8 points and 5 rebounds, and Freshman Olivia Davila contributed 7 points and had 3 steals.  The Lady Mustangs face the Boerne Greyhounds on Saturday at 2 pm at Boerne High School. Come cheer on the Mustangs!