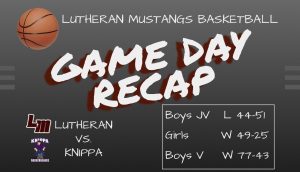 The Mustangs took on the Knippa Rockcrushers Tuesday night, the home opener for the boys’ teams. The JV boys opened the night. They fought hard all game but came up short in the end. The final score was 44-51. Sophomore Korbyn Raesch led the team in scoring with 16. Freshman Taelor Wilson was also in duble digits with 10 points, and Junior Alexandro Daovan contributed 9 points.
The Varsity girls took an early lead and were up by 16 at halftime. In the second half they remained strong and won 49-25. Sophomore Maya Sanders led the team with 21 points and 15 rebounds. Sophomore Kellie Khlot added 7 points and 7 rebounds, Sophomore Kate Simnitt had 6 points and 5 rebounds, and Freshman Rachel Sanders contributed 5 points and 7 rebounds.
The Varsity boys commanded the game from the start. The halftime score was 37-19. The Mustangs outscored the Rockcrushers 22-8 in the third quarter to extend the lead. The final score was 77-43. Junior Mason Knowles led the team with 32 points, including going 9 for 9 at the free throw line. Sophomore Stephen Jones and senior Zach Beidinger each added 12 points, and Zach also grabbed 14 rebounds. 10 points by Senior David Wenthe and 12 rebounds from Junior Noah Gonzalez contributed to the Mustang win.
Go MUSTANGS!!!