The Mustang basketball teams will begin district play next week.  The varsity boys’ team has had a very successful season so far, with a current record of 19-9. They participated in the Glen Rose tournament in December, defeating two 3A UIL schools and competing strongly against other 3A and 4A UIL schools.  In the game against Gatesville, Senior David Wenthe set the school record for 3-pointers in a game with 11. The Mustangs also took 2nd place in both the Randolph and LHS tournaments.

The boys recently had an opportunity to play in the AT&T Center.  Coming out with a victory was one of the best experiences of the year so far.  The Mustangs have a very balanced team this year, which is one of the reasons for their success.  At any time, any one of the boys can step up and score or defend when needed.

Coach Biedinger is looking forward to the start of district play on Tuesday.  His goal is to continue to improve each day and each game. “We have a standard of play that we hold ourselves to and each game we want to inch that standard up a notch.  We know that if we continue to do that each game will take care of itself.” 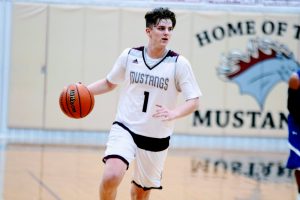 The JV boys team has seen a lot of growth this season. After a heartbreaking loss on Thursday night by one point, the JV Mustangs are 6-8.  Freshmen Brady Wunderlich and Taelor Wilson lead the Mustangs in scoring, while freshman Seth Wenthe and junior Brandon Gentry grab the most rebounds per game.  Sophomore Korbyn Raesch and Brady Wunderlich lead the team in assists. The JV Mustangs are realizing what it takes to be a team and sharing the ball as a team. They are looking to make a push to be the JV District Champs, with everyone having the same goal and vision.  Coach Adrian said, “The only way we are going to do this is together. One team, one family. Go Mustangs!”

The Lady Mustangs are currently 18-11.  In December, they were Tournament Champions in the Galveston O’Connell tournament.  Over Christmas break, they participated in two very competitive tournaments against both private and public schools.  The Lady Mustangs are also a very well rounded team. Sophomore Maya Sanders leads the team in scoring, averaging 18.6 points per game.  Junior Kamryn Boriack, Maya Sanders, and freshman Rachel Sanders each grab 5 rebounds a game, and Maya Sanders, sophomore Kellie Khlot, and freshman Olivia Davila combine for over 6 steals per game. 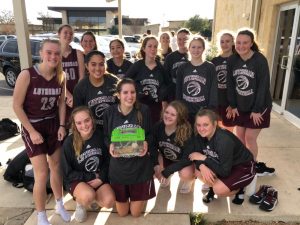 Coach Sanders is excited to begin district play.  When asked his thoughts about the upcoming games, he said, “Our district is very tough.  There are three quality, competitive teams that play hard. All three have consistently been ranked in the top ten in state.  But we have played a tough schedule, and I think our team is in a good place to take on this challenge.”

Mark your calendars for the game times listed below.  Let’s fill the stands with Mustang fans!

@ Our Lady of the Lake University