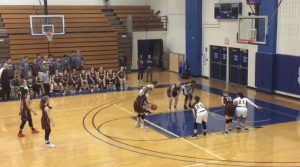 The Mustangs played the JPII Guardians on Friday night at Our Lady of the Lake University. The JV boys had a great first half, leading 28-27 at halftime. However, they were outscored in the second half and lost 42-57.

The Varsity girls started off the game on a 7-0 run. There were several lead changes in the first half, and the Mustangs were trailing by 5 at halftime. They couldn’t quite get into a groove after halftime, and were down by 11 at the end of the third. During the fourth quarter, they cut the lead to three and outscored the Guardians 20-14, but came up just short, losing 56-61. Sophomore Maya Sanders led the scoring with 28, and freshmen Olivia Davila and Rachel Sanders each chipped in 8. Overall the Mustangs were  24 of 37 from the free throw line.

The Varsity boys came out strong and were beating the Guardians 50-37 at halftime. Overall, the Mustangs sank 26 of 41 free throws and 4 different players (seniors David Wenthe and Zach Biedinger, junior Mason Knowles, and sophomore Stephen Jones) scored in double digits. The final score was 81-76, putting the Mustangs 2-0 in District play.