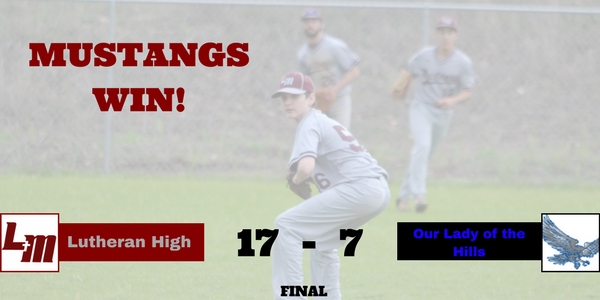 Lutheran High clinched at least a two seed in the district with the defeat of Our Lady of the Hills on Tuesday night thank to an offense that put up 16 hits. The Mustangs jumped out to an 8-0 lead before Hawks cut it to 8-5. That would as close at it would get as the Mustang offense was just too powerful.

David Wenthe went 3-5 with a triple, 4 runs scored, and 3 RBIs while JJ Davis had a pair of doubles and 3 RBIs. Kole Davis, Sam Schimke, and Noah Gonzalez each added a pair of hits.

Wenthe went 4 1/3 innings striking out 8 while allowing 5 earned runs to pick up the win. Christian Chapin finished off the game striking out 4 in scoreless relief.

The Mustangs will host Sacred Heart on Tuesday, April 24 with the district championship on the line. The Mustangs are 7-1 in district while the Indians are 6-0. First pitch is scheduled for 5 PM.