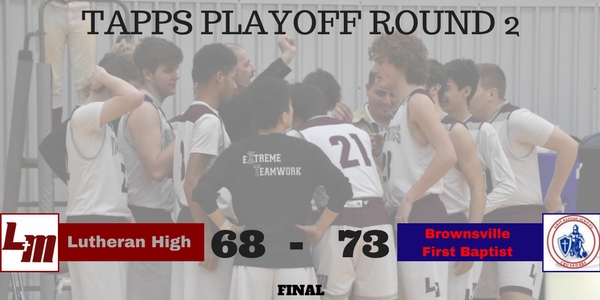 The Lutheran High Mustangs boys basketball season came to an end on Tuesday in Brownsville at the hands of the First Baptist Crusaders. The District 6 Champion Crusaders eeked out a 73-68 win over the Mustangs in the 2nd Round of the TAPPS 3A Boys Basketball Playoffs.

The Mustangs led for almost all of the game, including by 21 at one point in the second half, but the Crusaders kept chipping away until taking the lead with under 90 seconds to go in the game. The game was tied at 68 with 40 seconds left but a basket by the Crusaders gave them the lead. The Mustangs missed a three pointer on the subsequent possession and the Crusaders hit their free throws to ice the game.